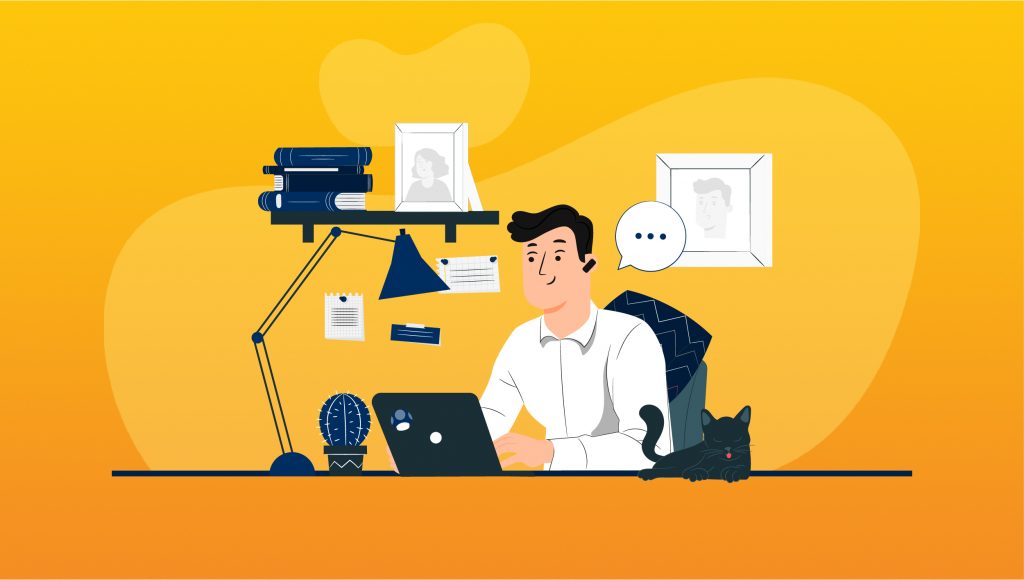 Sean: Here’s a question from V. How do you build trust with a company that’s working from home?

Le-an: So I kind of answer that a little bit of like my policy as a leader is always, just trust first. But then also on the other side of that, I do it as I said, I do have systems in place like we have Hubstaff that tracks their time and their screen. We also have the daily reports, we have the check-ins. So it’s giving that trust, but then also having the backup. Because life happens like, you know, family for you, Sean, giving birth, for me like taking care of my family first because I am the ‘ate’.

Le-an: So it’s giving that trust. But you also know your space for that wildness of life that sometimes brings you, by having that system of like, if I was out traveling or if I went home to Tacloban, I could just go into my inbox and check everyone’s data reports and be like, ‘okay, everyone’s fine today.’ Or, you know, they know that they can chat with me any time as well if they need feedback or if they need help with anything else.

Sean: Yeah, just to clarify, guys, I didn’t – it was my wife who gave birth. I’m sure you guys know that.

Sean: All right. So, yeah, I completely agree – Hubstaff is fantastic software. We use Hubstaff as well. Dave Nevogt, the CEO is a great guy and I support his company. I completely agree that trust has to be given at the get-go. As an entrepreneur, that’s the risk that we all have to take because you will not know if you can trust somebody unless you trust them. That’s the only way. And it’s a paradox, but it’s also quite true. And you have to trust your people. You’ve hired a lot of people who we’ve never met personally during the pandemic.

Sean: And SEO-Hacker has been growing and we’ve been hiring. We’re still hiring up to today. We have a lot of job openings. We haven’t met like 40% of the team right now. So that’s quite a handful. And we trust them and we have systems in place. I guess it’s a balance, right? Between trusting them and having systems. You cannot ‘not’ have systems. And I liken it to the airport where you go to our airport here in the Philippines, they’re just there’s just so many checks. You know, there’s the check-in front and the check inside, and another check that you’ve got to do. And they strip you down, take off your belts, your shoes. Right. I mean, it’s like we’re all drug dealers there – like we’re all suspects.

Sean: And I teach this to my team that you look at the airport, they’re looking for the 0.000001% that you’re going to be a terrorist. But everyone goes through that and it’s a hassle. And that’s because they just want to make sure that, that small chance of that happening is it’s out of the way. Yeah, it’s prevented. It’s prevented. And in a team, in a company, that’s our job as CEOs. We trust you. You know, we trust you. We know you’re not a terrorist. You bought a ticket, but you still got to go through all these checks, right? It’s the same thing. So that’s how I’m going to be answering this, trust is given, but there are checks we all have to go through.

Sean: All right. Next question. As a leader, how do you manage a team or a team member that broke your trust? There we go.

Le-an: Very interesting question. So like I mentioned, I’ve had times in my leadership that – I’ve been very honest with this with people, they know – mostly if they ask some things, I do forget because I don’t know. I don’t know how to bring that up. But like, whenever people break the trust, there is usually like, I always give people the benefit of the doubt. That’s one of the things that my mom taught me over and over again is always giving people the benefit of the doubt. There’s always more to the story that you see. And when I was at a very short stint as a journalist, I also learned the lesson that people might, will say something on the surface, but something else is going on.

Le-an: So usually when people break my trust, I know that something might have gone wrong, that they’re either too shy to admit it or they’re too ashamed to admit it. So then I give them that space of like, okay, basically I give them that feedback of you admit that something did go wrong and you didn’t you weren’t able to tell me or you broke my trust in this way. Are you still going to do this going forward? Of course. Nine out of ten, they’ll say, ‘yes, I won’t do this moving forward.’ But then the next time that it does happen, you already had that commitment with them, that they know that what they did was wrong and they broke your trust. And they also agreed, even though it might have been half-heartedly, that ‘I will not do this again and they do it again.’ That’s now up to them. That’s not any more me. That’s not anymore, like anything that the company was doing. It’s now their responsibility to live up to their words.

Le-an: So whenever the second time opens, usually they’re really nice, and then usually sooner or later they actually let themselves out. That’s one of the things I’ve seen multiple times is then they see like, ‘Oh crap, they’re not going to trust me anymore to do this. I’m just going to go.’ So that’s kind of the natural thing that does happen.

Sean: Yeah. Yeah. And it’s always really good when they show themselves the door because we don’t have to do all of this government-required stuff and, you know, giving them something, even if they’re the ones who screwed up. Good answer. Good answer.

Sean: I guess for me, it’s going to be – I am going to have to confront that person about what he or she did. And if the person would not admit usually and Le-an is right, usually they won’t. We just have to keep a close watch over them, and out of your, I don’t know, like we have 50 people in the I think you also have around 50 people in your team.

Le-an: For 2XYou we’re actually less than 20 right now, before everything else because I do also help manage the other companies. We’re about like 70.

Sean: So like for example, I’ll take that as an example with 70 people, you don’t need to like check-in on 70 of them, right? There’s just like one, two, maybe five people that you got some red flags on and you’re checking in on them from time to time. Right. So with SEO-Hacker, it’s more like that. There are some people who I take mental note of and I know that you know, even if sometimes you don’t really know if they broke your trust outright because you don’t have direct evidence, you just know that something’s happening there.

Sean: As an entrepreneur, you got that gut feeling and especially CEOs who have been CEO for like a decade, you will have that gut feeling when something’s going wrong with a specific team. You just know that there’s someone there with the red flag spreading malicious stuff, or it’s not good. Nothing good is happening there. And they might be performers. They might be performers.

Le-an: They usually sometimes are even. That’s the worst part.

Sean: That’s the worst part. They’re excellent performers, but their attitude is rotten to the core, and it is going to be the best case when they show themselves the door. So when someone out rightly broke, broke your trust, breaks my trust. It would depend on what kind of mistake they did. If it was a work mistake and it’s not fatal and it’s not a repetitive mistake, then usually we just forgive it. And if we say, Just don’t do that again, we’ll pay the tuition fee. I’ll talk with the client, try to fix it, try to try to mend it, and just don’t do that again.

Sean: But if they broke your trust in a fatal way, like, I don’t know, they start selling drugs and stealing money, whatever it is, then that’s a grave offense. And they can get fired for that immediately. So I suggest that when that happens, just immediately fire them because that’s a problem of character. It ain’t any more a problem of carelessness or professionalism. When you have a character flaw, it is very hard for you to change, because you and I are not God. We can’t change someone’s character. Yeah, and we can train that as well.

Le-an: I love that you said tuition fee. That’s just such an awesome concept of like – but for me, my head like I differentiate someone who makes a mistake and someone who actually broke my trust. Those are two separate things. But I love that you said that we pay the tuition fee. You learn this mistake. You’ve learned it right? Now we move on. But that’s kind of just I that just caught in my head. I was like, oh, I really like the way that you put that. Yeah. So I was just complimenting you. That’s really cool way of thinking of, like, making a mistake. Yep. You’re good. Let’s move on.

Sean: Hey, I’m learning from you Le-an, and it’s only fair that you get some stuff from me as well, so yeah. So for me, when someone does break my trust that way and it’s a fatal mistake, it’s repetitive, then we have to serve them by giving them memos and telling them, you’re going to be on your way out if you do that again.

Sean: Yeah, yeah. We got to do our due diligence. Otherwise, it’s going to be very hard to let them go if they want to stick and stay. With an outright breaking of trust, gossip and slander and just trying to destroy the team, that one is the more dangerous one. And we usually try to investigate by asking around asking our team leaders or lieutenants in the team, What do you think about this person? What are you hearing from this person? Or you have to keep an eye out for what’s happening with people who are surrounded by that person, that person’s direct team, or their friends in the company.

Sean: And if whenever you name drop that person, people’s heads get low, then you know there’s something there that’s a good observation. And you’ve got to let that person go one way or the other. Often they would let themselves out, as Le-an says. But if they don’t, you have to make sure that you have enough plans in place to be able to talk with that person and decide or reach an agreement that you got to part ways